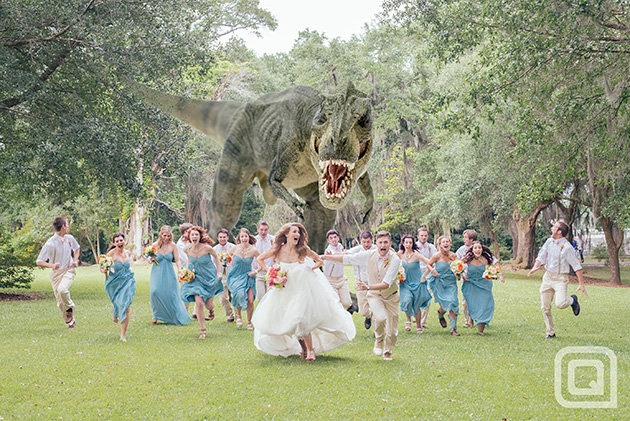 You ever had a moment when you asked yourself, "Why didn't I think of that?"

As a photographer, I have those moments often.

When I first saw the above photo of a Tyrannosaurus Rex chasing a wedding party, the thought struck me. It's so cheesy, it's so campy...but it's so good. It makes great use of the beauty surrounding the Myrtles Plantation in St. Francisville. And everyone looks game.

What makes it good is the idea behind it. Nothing more, nothing less.

Technically speaking, it isn't a difficult shot to get. Just line up everyone in the background and have them run to the foreground on some sort of signal. Have them scream and shout the whole time, and it should translate into the final photo.

Snap away to ensure at least one shot will catch everyone playing along, then go back later in Photoshop and slap on the dinosaur.

As easy as it may be, it's struck a chord. It's wildly creative. Therefore, it deserves all of the publicity it receives as it spreads like a virus through social media.

Who is Michael Tortorich? A lifelong resident of the south Louisiana swamplands, his journey as a journalist (with a specific flair for photography) began well before earning a penny for his work. He's a proud LSU graduate, holding a degree in journalism (along with minors in two avid subjects, history and psychology). He has worked full-time positions at two local television stations (in graphics and as a show producer), and as a sports editor of a suburban newspaper. He currently owns and operates Michael Tortorich Photography, LLC. The business provides a wide range of photography services, including event coverage (weddings, parties, sporting events, etc.) and portrait sessions (high school/college seniors, families, children, etc.). He also coordinates social media for the City of Donaldsonville (facebook.com/DonaldsonvilleLA and twitter.com/CityofDville), and contributes to Ascension Parish online news source, The Creole.