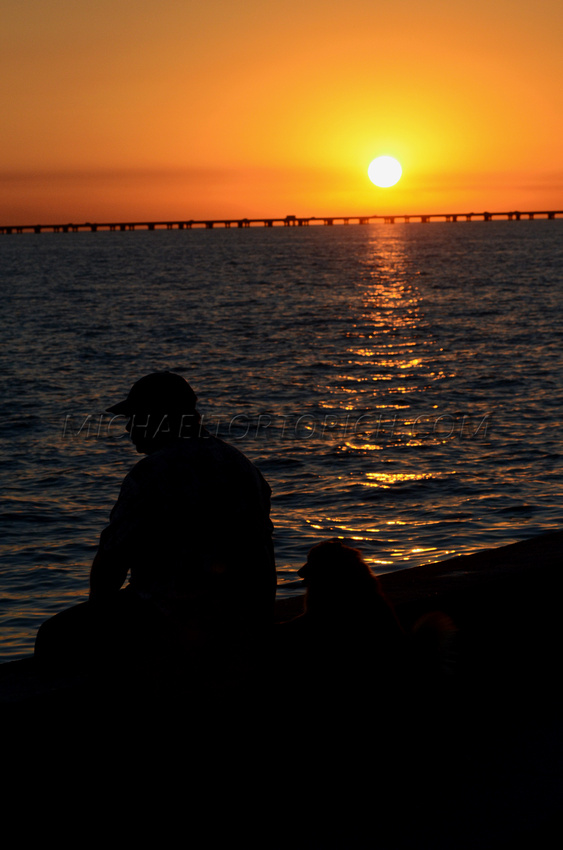 Sunset photography is almost cliche. To make this photo unique, I gave it a story to tell by including a man and his dog as they overlook the lake.

I wonder if I'm any good.

I suppose we all do at some point or another. It's just human nature. We all wonder about ourselves, our talents.

Ask anyone who knows me, and they will tell you that I'm my own worst critic. When it comes to my photography, I have an incredible knack for finding something wrong.

Even when I'm told that a particular photograph is exceptional, I seem to find a flaw. After all, I'm not perfect. No one is.

Anyone can produce good work. If you can see through a viewfinder and press a button, you can take an interesting photograph. It may be a case of a blind mouse finding cheese, but it is possible.

The only way professional photographers separate themselves from every one else who can take a picture is by making money.

Of course, most professional photographers are highly skilled and talented at their craft. But not all are great. For that matter, not all are even good!

Lots of photographers make money simply because they excel at sales. They are great at booking jobs. They have figured out the best ways of networking and marketing their business. This can make up for their lack of skills.

I know of a photographer that inadvertently started getting business after photographing some kids as a favor. She wasn't particularly interested in being a photographer, but apparently there was a demand for her services.

She admits her photos aren't that great. One shot was composed in a way that left an excessive amount of head room. The poor child in the photo looked cross-eyed and visibly disgruntled about the whole photo shoot idea.

How could any parent actually like this? Well, they did. They even tipped the photographer by sticking a wad of cash in her camera.

And just like that, a photographer who took technically bad photos was technically a professional.

The photos may not have been any good, but they were a hit with the clients...probably because they were all of their kids.

A friend once told me about a time in college when he picked up some extra money. He had a friend of his who was a photographer. She would go around to sorority functions and take pictures. Well, one night she couldn't go out and shoot, so she asked my friend to handle the job.

He told me he didn't know the first thing about working the camera. She basically showed him how to turn it on and how to snap a photo.

Long story short, he went out and took lots of photos of sorority girls, and was paid.

Were the photos any good? Nah.

The sorority girls didn't mind though. He did the job, and he was paid.

Didn't have any skills...didn't matter. For the night, he was a professional. He wasn't any good, but he was popular.

As the old saying goes, beauty is in the eye of the beholder.

Sometimes I take beautifully composed photos of people, and the client asks why I cropped the subject's head off. They don't seem to see that I may have been focusing on the subject's eyes, or expression. You know, trying to be artsy.

All they see is a photo with their kid's head lopped off.

Beauty means different things to different people. This is precisely why a good photo and a popular photo can be wildly different.

Take a poll on how people feel about sunsets. Love 'em! Who doesn't?

Post on Facebook a photo of a sunset over a lake, framed by two trees, and you will get lots of likes and positive comments.

Is it a good photo? Sure, it could be. Is it a popular photo? Well, yeah. Your aunt Cheryl in Florida seems to think so.

A variation of this applies to virtually any photo that contains a sunset, baby, puppy dog, cat, wildlife of any sort, or skanky woman.

I don't know about you, but I had no idea that so many models lived in my area. Apparently serious modeling has moved from places like New York and is now being done in the flyover states. An orange tan, cake makeup, and a pushup bra goes a long way.

You don't have to look far to find a community college dropout bent over a Dodge Charger attempting to look sexy.

Is she a model? No, handing out Coors Light at the casino is not modeling. Neither is appearing in an ad for a local frou-frou clothing store.

Is the photo popular? Well, yeah. It's a photo of a half naked woman. Guys are going to like and comment on it until the cows come home, even if the composition is boring and the exposure is all wrong.

You could have her bent over a 1987 Toyota Camry with a garbage truck in the background and it would draw the same response.

When you are interested in hiring a photographer, it's a good idea to reflect on why you are selecting this individual or company.

Are you going to a retailer because you are trying to save money? What if the 17-year-old behind the camera isn't any good? After all, they probably have a whole six months of experience. In that amount of time, they've mastered getting the same old boring photos.

Are you going with the same photographer in town everybody always uses? You know, the one who has the same glossy backdrops he used for the 1986 prom.

Ask yourself why everyone chooses these particular photographers.

Just because they are popular, it doesn't necessarily mean they are any good.

I've given you several options below for contacting me, so you kinda don't have an excuse: